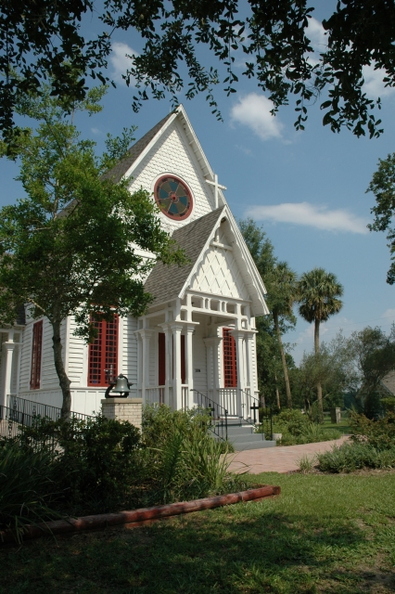 Deeply Rooted In Our Community

Early in 1882 a young Englishman of noble stock, Granville Chetwynd-Stapylton, came to the forested frontier of then Sumter County in Central Florida to grow oranges and to reap the financial rewards from growing them.  To that end Stapylton established a learning center of sorts, Stapylton and Company, on the southeast side of Zephyr Lake where he built a boarding house, a large stable and a dining hall with an attached kitchen.  Then he recruited young, well-educated, single men from Great Britain and its colonies to come, learn and and grow citrus on company land—all at their expense. Other British folks emigrated to the area and settled on both sides of the Florida Southern Railway tracks in an area later described as ten miles by three miles. The railway’s Orange Belt Route tracks paralleled the west side of present US Route 441/27 in now western Lake County that remained in place until 1982.

Interest in the settlement was slow but by the end of 1885 about 70 men, women and children had settled in the colony that by then was called the Colony of Chetwynd. Most were Anglicans. And they rode horses—for transportation and for racing. While local lore claims that debaucheries observed at the races by a visiting English priest provided an obvious need for a church, that story is probably untrue.

Wrote Thomas Vincent, vestry secretary in 1886, “The want of an Episcopal Church and a clergyman in the English Colony known as Chetwynd, Lake County, Florida, has been for some time felt, and a movement has been made to obtain subscriptions to erect a Church in the colony.  The only available services are those few held by the Rev. Dr. [John B. C.] Beaubien at Leesburg and Gardenia [Fruitland Park].  These meetings being considered as of too irregular a type to meet our needs, a general meeting of the colony has been called for July 3, 1886, to assemble at a general place, Stapylton & Company’s dining hall to discuss what steps shall be taken to provide the neighborhood with a church and a rector.”

As a result of this meeting permission was sought and ultimately granted by the Diocese of Florida to establish a mission. The first service of the Holy Trinity Mission, Chetwynd, was conducted December 19,1886 by The Rev. John Campbell Wheatley Tasker of London—under  the authority of the Bishop of London—at The Hall on Zephyr Lake. It was Stapylton, the church’s first senior warden, who had persuaded Tasker to come. In the meantime a committee formed to explore sites for the church. A decision was finally made January 28, 1887 to build a church on the present site—about half-way between Fruitland Park and Stapylton’s little town, also called Chetwynd, on Lake Ella—as the crow flies.

On behalf of the Diocese of Florida Stapylton purchased a one-acre site from a freed slave, Samuel J. Tanner, for $20.00 March 24, 1887. Until the church was built services were held in an old barn on John Vickers Smith’s land on nearby Lake Geneva. Tasker stayed only a few months. The new mission was then served by supply missionary priests from Florida as well as other nearby states.  Finally the Rev. Joseph Julian of Ohio arrived to serve missions in the area including the St. James Mission in Leesburg where he and his wife Sarah resided.  Julian conducted Holy Trinity’s first service in the new Carpenter Gothic church with a bell tower December 2, 1888; it was consecrated the following July.  For nearly 87 years Holy Trinity would be served by the rector of St. James—Julian being the first.  As for the bell tower, a haven for bats and a target of lightening strikes, it was removed in 1925 and never replaced.

Because the local colonists lacked financial resources, all but about $800.00 of the total cost of $2,500.00, was raised through the efforts of Stapylton’s father, the Rev.William Chetwynd-Stapylton, who helped organize a bazaar at his parish near London, England, to benefit the new mission.

Coincidental with the church’s consecration in 1889, a white wooden lych gate, said to be one of the oldest, if not the oldest lych gate in the country, was built.  Originally designed for either the coffin or the pallbearers to rest on its benches before processing into the church it is now used for the deceased’s family to rest for prayers with the clergy before entering the church for the Burial Office.  Emily Tatham, a life-long English Quaker who regularly attended the Episcopal church, donated the funds.

In October 1894 the colony’s first priest, John Tasker, donated a little over 11 acres adjacent to the church acre.  Some of this land was designated for the Chetwynd Cemetery—now called Holy Trinity Cemetery.  In the late 1960s a small Sunday School building was constructed followed by two additions, including a large parish hall, in the 1970s.  Two decades later an education building, now the home of Holy Trinity Episcopal School, was built.

While many of the colonists moved on after four or five years the devastating Great Freezes of December 1894 and February 1895 that wiped out nearly all of the citrus trees in Central Florida, was the death knell for the Colony of Chetwynd.  But Holy Trinity, today the only remnant of the short-lived colony, has—in grand times and hard times—prayed, persevered and remained open for worship.

To recognize its architectural and historical significance and to encourage its preservation, the church was placed on the National Register of Historic Places September 30, 1975.  March 12, 2011 the Timucua Chapter of the Colonial Dames of the 17th Century placed a historical marker near the lych gate.